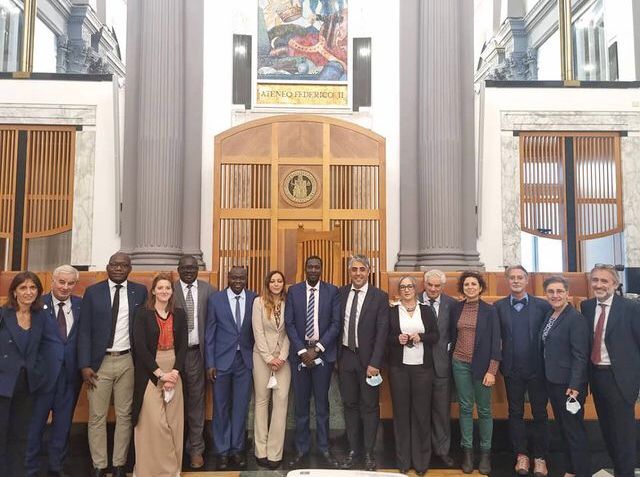 Results of the RBF (Result Based Financing) study presented in Naples

Dr. Ambrosoli Memorial Hospital and St. Mary's Lacor Hospital are two effective examples of the impact of RBF on the quality of pediatric services.

In recent decades, new funding methodologies have been developed with the objective of increasing support for health programs, overcoming the lack of traditional funding mechanisms. Among these is the Result Based Financing (RBF), a financing mechanism that aims to improve the quality of donations by binding the disbursement of funds to the achievement and audit of predetermined results.

The conference, which was held last October 29 in the Auditorium of University of Naples Federico II, organized in collaboration with the Corti Foundation and the Ambrosoli Foundation, was an opportunity to present the results of the study promoted in collaboration with the University on the effectiveness of the RBF project funded by the Italian Agency for Development Cooperation (AICS) and Cariplo Foundation.

A moment to reflect, thanks to the intervention of authoritative guests, and bring attention to one of the most important methods of supporting global health. At the same table the representatives of the two Foundations, experts in development and global cooperation of international standing such as Nicoletta Dentico of the Society of International Development and Eduardo Missoni of Bocconi University. AICS speakers Mariangela Pantaleo and Andrea Stroppiana took part; James Mwaka, representative of the Ugandan Ministry of Health, underlined how Uganda believes in this financing system and in collaboration with public and private entities of international importance.

The RBF has been found to be the driving force of change for pediatric services, considering that 50,000 children are welcomed and treated every year at Lacor, thanks to one of the largest pediatric wards in Northern Uganda, while Dr. Ambrosoli Memorial represents a life-saving stronghold in a district where 37% of the population is under the age of 10.

St. Mary's Lacor Hospital (Gulu) and Corti Foundation have designed a privately funded RBF system primarily based on quarterly external audits of quality standards. Initially developed to finance outpatient activities, the RBF system was extended to the pediatric wards of Lacor Hospital and introduced for the first time at Dr. Ambrosoli Memorial Hospital in Kalongo in the pediatric ward. After 3 years, this methodology has shown great potential for improving the quality of hospital services.

“The RBF system consists of a support given to a structure according to the quantity and quality of the results it achieves. More than half of the support projects in developing Countries do not reach the predetermined objectives and do not transform the local reality. Evaluating the quality of the services offered is a real revolution "- says Professor Luigi Greco, Professor of Pediatrics at the Faculty of Medicine of University of Naples Federico II and Associate Dean of the Faculty of Medicine of the University of Gulu which contributed to found, head of Federico II's GULUNAP project and cooperation projects with Uganda - “We compared the quality of care for children of two big hospitals in Northern Uganda, St. Mary's Lacor Hospital and Dr. Ambrosoli Memorial Hospital, performing a quarterly supervision. In light of these results, we have verified that the project has produced for the first time a significant improvement of 30-40% in the quality of care in these big hospitals ".

The analysis of the data starting from the medical records and RBF check-lists sent by the two Ugandan hospitals was carried out by the team headed by Professor Sergio Beraldo of the Department of Economics and Statistics of the University of Naples Federico II: "The examination of patient records showed that the quality of medical care improved, mortality in children, reinfection rates and hospital stay time decreased ",

The RBF method consists in assigning a fixed amount, equal to about 15 Euros, for each pediatric hospitalization. This figure includes the investigations and therapies needed by the child, regardless of the length of hospitalization and the type of illness. To this is added a quality bonus which is attributed based on the score achieved by verifying the quality of the services quarterly. The score ranges from one to five and allows you to increase the amount paid to the hospital from 5 to 25 percent, thus attributing a financial bonus to the hospital. (note to Laura: I deleted this part because Corti and us, we use the bonus differently and it would take too long to go into detail on the different ways of managing the bonus)

Both at Lacor and at Dr Ambrosoli Memorial Hospital quality and quantity indicators have been developed: it is a very detailed list with parameters monitored every three months by members of an internal quality committee and by a representative of the Ugandan Ministry of Health.

An approach that has managed to aggregate private and institutional donors thanks to the security it offers and the regular and frequent monitoring that allows the donor to follow the project step by step, with its successes and challenges. The Italian Agency for Development Cooperation, which, since April 2018, has financed the initiative with a total amount of 750 thousand euros, believes it to the end.

"At Lacor Hospital there have been structural improvements and increased attention to infection prevention, the availability of drugs, the preparation of all personnel for emergencies and the development of protocols for clinical and nursing procedures - said the Dr. Venice Omona, specialist in pediatrics and head of the pediatric ward of Lacor - “The sense of responsibility of the staff with respect to the resources of the ward has improved; they are all more attentive to every step that concerns the care of little patients. We have developed new protocols and the challenge is to be able to follow them in the best possible way. The dialogue between the staff and with the parents of the young patients was also at the center of the work and I noticed improvements in the ability to explain diagnoses, necessary investigations and therapy "

Even in Kalongo, where the RBF methodology with quality checks was introduced for the first time with the project funded by AICS, the program has produced a truly remarkable impact, as shown by the data developed by Professor Greco in the examination of medical records.

“The clinical management of pediatric patients has improved significantly since 2016, most notably in Kalongo. Observe for example the increase in variations from 2016 to 2020 to evaluate the marked changes that have occurred: the compilation of a detailed clinical history and the accuracy of the child's examination have improved by more than 6 times (= 600%). Likewise, good sepsis treatment has increased 9 times, ” underlines Professor Greco.

Dr. Godfrey Smart Okot, director of Dr. Ambrosoli Memorial Hopistal, confirms the evidence found through the examination of medical records: "Before the start of the project, three years ago, the clinical and ethical practice regarding the care of the sick child in the hospital was more rooted in the routine. Subsequently, the approach evolved. More emphasis is now placed on studying the sick child, communicating eloquently with the child's caregiver, and ensuring that the treatment environment is sufficiently holistic (clean, safe and calm). The preparation of the project actively involved the staff, through training on 'best practices' and the related advantages. The staff therefore realized how much this method not only guarantees that the sick child heals, but also affects positively their professional skills. The final result is that the overall quality of care has improved significantly compared to the period before the project ”.

This result is even more significant if we consider the stress to which the Kalongo hospital and the pediatric ward were subjected for the always lurking epidemics: between 2019-2020 due to malaria, total hospitalizations increased of 83% compared to the same period the previous year,  the bed occupancy rate of 198%. This means that for months the hospitalized children exceeded the availability of beds in the ward and the staff was forced to accommodate more patients in one bed or use improvised spaces for hospitalization. Then followed the long period marked by the pandemic, where all the ward staff remained always operational and ready to welcome the numerous patients, despite the fear of contagion.

“The RBF method is a tool that helps to maintain a surveillance and control system on the quality of services”, emphasizes Professor Greco. “It is a model that helps to avoid waste”. Many, therefore, have been the successes and many more challenges. “The greatest is that the changes induced by this three-year project become everyday life”, concludes Luigi Greco

We thank the University Service Center for the Coordination of Special Projects and Organizational Innovation (COINOR) and the support of Federico II Department of Economics and Statistics.